Image Power S.A. operates in the video game market, specialising in the production and distribution of games for desktop computers. The company was set up on June 24, 2016 and launched its activity connected to the gaming industry in 2019. In the same year, the company acquired an important investor, PlayWay S.A., leading video game producer and publisher, listed on the Warsaw Stock Exchange.

The company produces, publishes, and markets games. The company’s products will be sold worldwide via the digital distribution model, mainly through the dedicated distribution platform Steam, the largest distributor of PC games in the world. Apart from that, it will also publish games for consoles such as Nintendo Switch, Xbox One and PlayStation 4.

The driving principle of its activity is the production and distribution of several low and medium-budget and low-margin games. The products are created by scattered small teams of developers, which reduces operation risk thanks to optimal reactions to unexpected random events which may occur during project production. The issuer currently has 4 internal and one external team.

Paweł Graniak – Chairman of the Board

Paweł Graniak has several years of experience in specialised positions. He worked as a 2D graphic designer and concept artist, and later as art director in advertising agencies. In 2011 he launched his own school of concept art and digital painting Potęga Obrazu. He creates scripts, dialogues, plots and bestiaries, as well as balances games. He is also a visual communication specialist.

Piotr Figarski – Vice Chairman of the Board

Piotr Figarski has been involved with the company since its very beginning. He started off as level designer and currently still performs related duties. In addition, he is an experienced quest and game designer. At present, among other things, he manages the Issuer’s teams and also supervises pre-production. For several years he worked as a volunteer for the gamereplays.org website and became its administrator at the turn of 2009-2010.

Marcin Zaleński – Chairman of Supervisory Board

He has over 20 years of experience in sales in the commercial sector and financial institutions, as well as over 10 years of experience in building and managing sales teams in the financial and investment sectors. He has been on several boards of commercial law companies. At present, he is also Chairman of the Board of Fundusz Stabilnego Rozwoju sp. z.o.o., of which he is the co-creator and shareholder, and its subsidiary Income Capital sp. z o.o., which, in turn, participated in the creation, development and debut on the Newconnect market of the company Movie Games S.A.

Legal adviser, longstanding member of supervisory boards and boards of commercial law companies. Managing Partner and founder of law firm Kancelaria Prawna Chałas i Wspólnicy. Expert in procedural law, corporate litigation, and merger and takeover transactions. He also specialises in contracts. Over the past 25 years he has represented the interests of the largest Polish companies and foreign multinational companies.

With a PhD in economics and finance, he has 10 years of experience in preparing economic analyses and managing investment risk. He also has experience in company valuation and business consulting.

In his career he has written about video games for, among others, magazines CD-ACTION, FILM and LADOS, and portals Polygamia.pl , Stopklatka.pl and Muzyka.pl. He has been working for PlayWay S.A. since 2013, as Vice Chairman since 2016. As COO/CMO in PlayWay S.A. he is responsible for the presence of global brands in Car Mechanic Simulator games, production supervision of games created by PlayWay S.A., media contacts and relations, discovering new developer teams, business contacts and company development, among others.

Andrzej Graniak graduated from the State High School of Fine Arts specialising in functional art forms. He deals with graphic design and publishing. He gives trainings in digital painting. He is head of the graphic department for publishers New Media Concept sp. z o.o. and Urma sp. z o.o. He also works as graphic designer for LAVA advertising agency.

Andrzej Graniak is the brother of Chair of Board and shareholder Paweł Graniak. 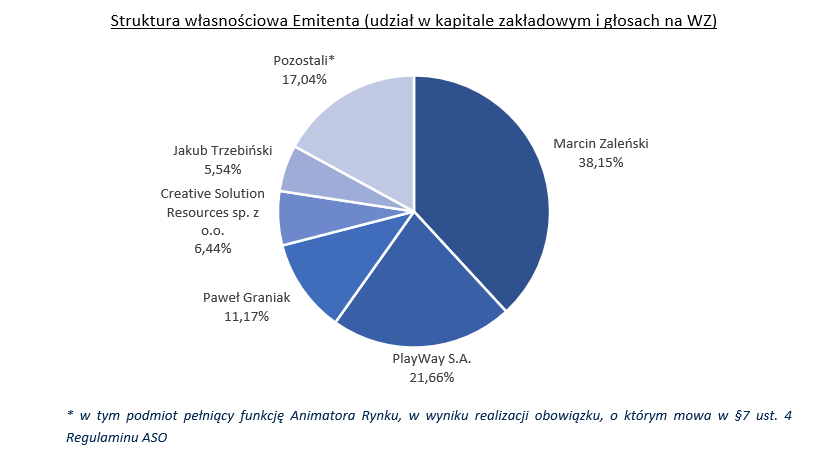 * including entity acting as Market Maker, as part of their statutory obligation as set out in §7 section 4 of Regulation ATS

In the approved development strategy, the company foresees further development by means of producing and distributing a large number of low and medium-budget, high-margin games. This approach of the Company Board ensures minimal investment risk related to the production of particular games. The development strategy will be implemented through achieving the following goals:

The approved strategy will be implemented by the Issuer throughout 2021 and 2022. In order to implement the development strategy, the Company is considering using funds from company operations, i.e., funds from games sales, funds acquired from publishers and funds issued from co-creating smaller projects.

The geographical structure of net income from Issuer’s sales in 2019 and 2020 (in zloty) is as follows:

According to analysts from market research firm Newzoo, in 2020, the global game market will generate $174.9bn worth of revenue, which means a year-on-year increase of 19.6%. In comparison, in 2019 the revenue was $152.1bn, which indicates a market value growth of $22.8bn. It is expected that in 2023 the game industry revenue will surpass $217bn, with a compound annual growth rate (CAGR) of 9.4% between 2018 and 2023. Two significant factors with a positive influence on the gaming sector are the COVID-19 pandemic, which boosts interest in games among people forced to stay at home, as well as the emergence of new generation consoles, which drives the development of the industry.

In terms of income, all game segments have seen an increase due to the COVID-19 pandemic, yet it is mobile games that have stood out as leaders. The forecast indicates that in 2020 mobile games will generate $86.3bn worth of revenue, which means a year-on-year increase of 25.6 %. This is also the segment which comes first when it comes to revenue among applications. Newzoo specialists quote several important arguments to suggest that mobile games are going to develop much faster than PC or console games. First and foremost, mobile games have the lowest entry barriers of all segments, as over 40% of the global population have smartphones, many mobile products are available free of charge, and the process of developing mobile devices is less complex. According to American research agency eMarketer, in 2016, in the United States alone as many as 180.4m people (70% of owners of mobile devices and 56% of the country’s population) played games on their phones. This number may reach 213m in 2020.[1]

The segment which is second in size are consoles, with a market share expected to remain for the next three years at an approximate level of 30%. The value of the segment in 2020 is estimated at $51.2bn, with over 729 million players, and the estimated value of the CAGR throughout 2019-2022 is predicted to be 9.7%. Physical distribution, mass cooperation between companies and certification are the main elements of creating console games, which may however lead to future delays or reducing the range and axing the functions of games which will reach distribution channels, all due to COVID-19. The share of computer games in market revenue is going to decrease, with a fall from 22% to 19% forecast for 2018-2023, even though the CAGR is forecast at 4.8%. In 2020 the global PC games market, driven by 1.3bn players, is going to grow and reach $37.4bn. The share of browser games in the video game market will see a decrease from 3% in 2018 to 1% in 2023. This is reflected in the estimated CAGR level, which in the above-mentioned period is going to stand at ca. -17.0%.[2] 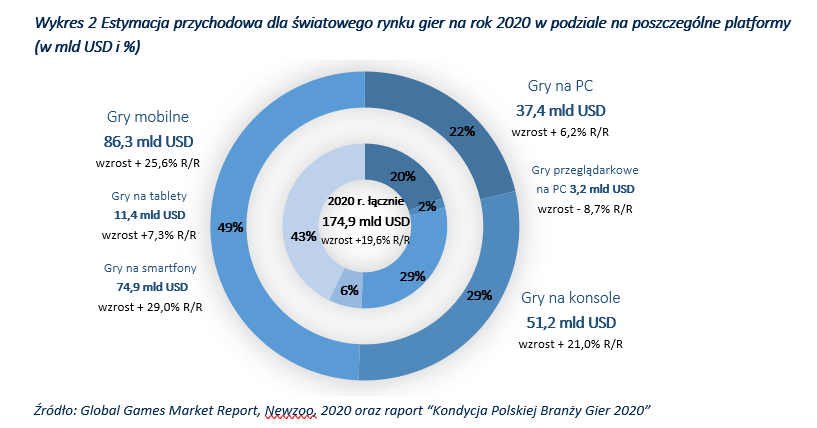 In terms of geography, Asia and Pacific is going to be the most profitable region for the video game industry in 2020, generating $84.3bn, or 48 % of the total global income from games. North America comes in second (26%), Europe third (19%), Latin America fourth, and the Near East and Africa fifth (3%). In the next three years, the fastest developing region in terms of game income is going to be India and South East Asia. The Chinese and US markets alone are due to represent 49% of all global consumer spending on games in 2020. 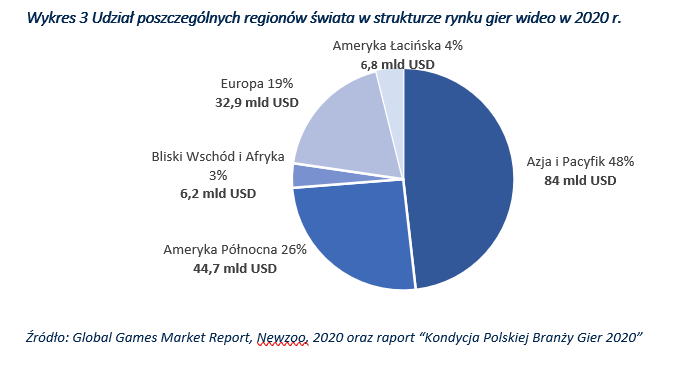 According to Newzoo, in 2020 the largest game market is going to be China, with a market value of $44bn. A slightly lower income of $41.3bn is going to be generated by the US. [3] Japan is expected to come third in terms of market size, with the value fluctuating around $18.68bn. Estimates for 2020 point to Germany as the largest gaming market in Europe, worth $5.965bn. The Eastern Europe region, which also includes the Polish market, has reached an income of $3.9bn with an annual growth rate of +9.1%. It has been growing at almost double the rate of the mature gaming market of Western Europe. In Eastern Europe Russia is responsible for $1.65bn, and Poland for $579m with a considerable year-on-year increase of 11%. According to Newzoo, in 2019 the value of the Polish game industry surpassed $596m, and the forecast prepared by the authors of the report . “Kondycja Polskiej Branży Gier 2017” (“The State of the Polish Games Industry in 2017”) from Polish Gamers Observatory for 2019 was close to the Newzoo estimates, with PLN 2.23bn, or $586m.

According to Newzoo, by the end of 2020, there will be over 2.68bn active players worldwide, the majority of which, 54%(1.447bn) will come from the Asia Pacific Region, Europe (386m) and Africa and the Near East (377m), representing respectively around 18% of the player population. Similar estimates have been presented by analysts from statista.com, who claim that by 2021 the number of players worldwide will rise to 2.67bn, which means an average year-on-year increase of 7.3% between 2014 and 2021. However, it is important to bear in mind that the rise in new player numbers or the reactivation of former users, triggered by the COVID-19 pandemic, might not be sustained after incidental gamers return to their regular habits or the financial situation of individual players in poorer or developing countries deteriorates. 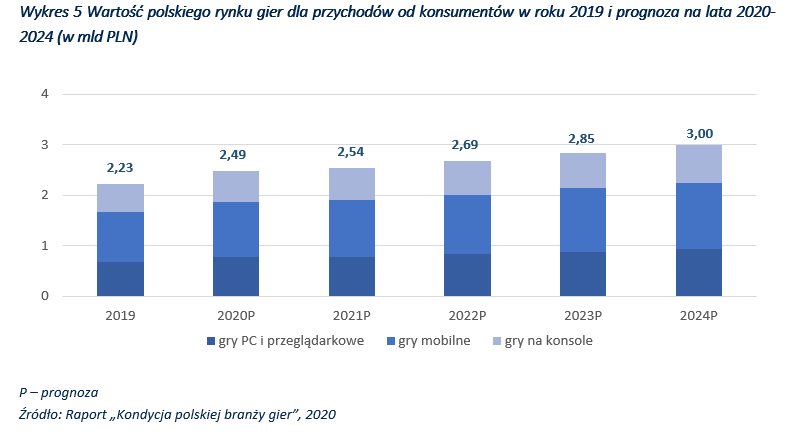 In 2020 the largest share in Polish game market revenue will be that of mobile games, which will surpass PLN 1bn, seeing a year-on-year increase of 12%. Their present share in comparison to other types of games in the Polish market is 44%, which is expected to rise to 53% by 2024. The second segment important in terms of revenue will be games available for personal computers, both box/digital versions and browser versions, whose result will reach PLN 770m. It is worth noting that a large part of the share of browser games in the market will be replaced by mobile games. There will be a decrease of approximately 13% in favour of smartphones. Console games will maintain their stable market share at 25% and in 2020 they will be valued at PLN 620m.

As for gaming platforms in Poland, ever since 2016 the most popular platform is that of mobile devices such as smartphones or tablets. In 2020, as many as 50% of gamers declared smartphones to be one of their sources of gaming entertainment. The runners-up are, on equal terms, games for personal computers and laptops and social media games – 31 % respectively. Third and fourth are PC browser games (24%) and console games (22%).

The most popular shopping platform among PC players is still Steam (38%). It owes its popularity largely to its long-term presence in the Polish market and numerous special offers that Poles are keen to use. Origin, indicated by 13% of the surveyed, came in second. Slightly less popular are auction websites, such as Allegro, eBay or OLX (12%). Microsoft Store and Epic Game Store were mentioned by 6% of the surveyed. Much less popular are domestic platforms for trading electronic game versions, such as G2A, Uplay and Kinguina. Surveys also suggest that a significant 57% of gamers download free games from the internet. What is more, traditional game distribution still has more fans, i.e. 46%, while 40% prefer digital distribution.